After The Storm: Touring Stage Performance

The six performances of After The Storm were the culmination and resolution of the larger heritage project Back From The Western Front, staged to coincide with Black History Month and the Centenary of The Great War. 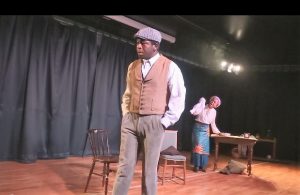 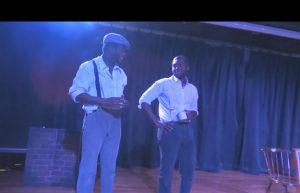 Madu and Kofi discuss the workers unions and their own lack of representation.

Madu dances with his new found friend, celebrating the African troop’s inclusion in the victory parade in the final scene. 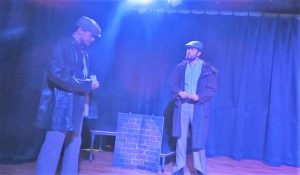 Local yobs trade insults, whilst planning an attack on the African community 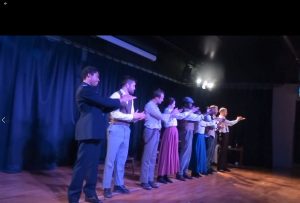 The cast thank the director and technician following the performance. 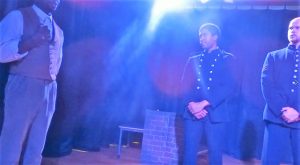 Police visit Madu’s home to arrest him following his rally for justice.

After The Storm is a 1hr 15min touring performance bringing to life the story of Okoli Madu, an African returnee soldier struggling to resettle in London in 1918.

Following job and housing shortages in London in the year following the end of the Great War, the production highlights the negative impact this had on servicemen from all over the commonwealth, particularly in relation to blatant racism- on both personal and institutional levels. This included the violence and riots that ensued on the streets of London and inherent daily prejudices, based purely on colour. Inequalities recognised as ‘never an issue during the war’ and the injustice of this, ‘We fought side by side’ becomes an undeniably prevalent theme for the audience to reflect upon.

In parallel narratives, the generosity and warmth of members of London communities are explored and friendships flourish. Recognising their responsibilities, governing forces begin to intervene. Step by step progress is made and justice begins to prevail. It is clear the journey ahead will be long and arduous, but ultimately the message is one of hope and unity, ‘we are one and the same’.

The story is based on historically accurate events, including the murder of Kofi, a decorated African serviceman, drowned in the docks during a particularly violent riot. Additional fictionalised characters tell the human stories and bring the history and heritage of this time to life.

A total of 87 audience members attended the performances.

Many of whom shared feedback. Some audience comments included:

“The production was put on incredibly. The production depicted the struggle and violence they faced post war it educated as an audience member and such an important message and awareness was portrayed through the production”

“Wonderful performance by both the actors and the production team. The story  impacts in so many ways. Thank you for spreading an important message”. – Khatija Hussain

“Really appreciate the theme and the bravery in telling this narrative. Especially loved the cast who played to great aplomb.”- Funke Adeleke

“Thank you, well done guys. We you managed to simplify the history and made me understand my history too. I will definitely come back for more” .- Ben

“I really liked the play, it was very interesting and it teaches you a lot about the history of war and our country which we don’t learn about in school.” – Fade

“Very moving production. It communicates a subject that needs to be heard. It came to life in a realistic and powerful way.”- Lucy Houbart

“Great, a much needed representation of a history often forgotten. The set, beginning in the entrance and performance of all the actors was great.” – Grainne Charlton

“A very entertaining play which although painful to watch at times, was full of hope and positivity. It taught me a lot and makes me grateful to these pioneering people.”– J. Jackson-Callen.